We're sorry but the candle you have selected is currenty in the process of being purchased or has just recently been purchased.

Please feel free to select another candle or check back in 15 minutes to see if the candle you have selected has been released for purchase.

We're sorry but there are no candles available for lighting.

You have already begun a candle purchase session. If you would like to continue with your current candle choice please click "Continue" otherwise please click "Select Another".

In Memory of
Earl Edwin
Southerland
1933 - 2018
Click above to light a memorial candle.

The lighting of a Memorial Candle not only provides a gesture of sympathy and support to the immediate family during their time of need but also provides the gift of extending the Book of Memories for future generations.

In the event that there is an error
in the information presented,
please contact the funeral
home by clicking here. 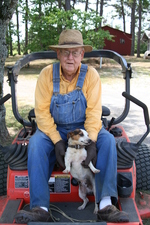 Earl E. Southerland, 84, of Drasco went to be with the Lord on April 3, 2018, after a long battle with Dementia.
He was preceded in death by his parents, Luther and Cora Martian Southerland; his brother, Cloys Southerland and sister, Erma Lee Rackley.
He was survived by his wife, Ruthell Deckard Southerland of 60 years; his son Tim Southerland and wife Sharon; his daughters, Pam Brooks and husband Ronnie, Kim Ezell and husband Dewayne; five grandchildren, five great grandchildren and many friends.
He was a member of Drasco General Baptist Church. He served as a sergeant in the Army during the Korean Conflict. He was also a member of the Cleburne County Quorum Court as a Justice of the Peace. Earl was known for his ability to talk to anyone, this carried over to his successful career in sales. He sold everything from cars to health and beauty aids. He passed this down to many of his family members. Earl also owned a grocery store called Southerland’s Market in Heber Springs.
Earl knew almost everyone, if by some small chance he didn’t know you, he was always quick to ask his trademarked question “who youns belong to?” Then he was sure to know at least half of your family.
Earl also loved dogs and enjoyed running his dogs at his sons-in-law Fox Pen in Drasco. He was also very well known for having one of the best yards in Cleburne County. He always enjoyed mowing and gardening.
Visitation will be held at Heber Springs Funeral Home on Wednesday, April 4, 2018 from 6pm to 8pm. Memorial service will also be held at Heber Springs Funeral Home at 2pm on Thursday, April 5, 2018

To send flowers to the family or plant a tree in memory of Earl Edwin Southerland, please visit our Heartfelt Sympathies Store.

This Book of Memories brings those affected by loss together by encouraging communication and self-expression. By giving friends and family a special place to tell their stories and express their feelings of loss, it helps them care for one another during a very difficult time. Click on any of the links to the right to access features or information within this memorial website.