To share your memory on the wall of Beverly Stancil, sign in using one of the following options:

Print
Beverly Brothers Stancil went to be with the Lord on February 2, 2021. She was born March 18, 1932 in Memphis, Tennessee to the late Jack and Victorine Brothers.

She loved music and enjoyed singing solos in many churches in Memphis, Tenn... Read More
Beverly Brothers Stancil went to be with the Lord on February 2, 2021. She was born March 18, 1932 in Memphis, Tennessee to the late Jack and Victorine Brothers.

Beverly attended Southwestern at Memphis, now Rhodes College, and graduated from Methodist Hospital School of Nursing in Memphis, Tennessee. She was married to Dr. Clark Stancil for 61 years. Her retirement was in 1993 from the American Red Cross. She was an avid seamstress, gardener, traveler, and a wonderful cook who enjoyed entertaining friends and family.

In addition to her parents she was proceeded in death by her son, Robert Clark Stancil and husband, Clark Stancil.
Read Less

Receive notifications about information and event scheduling for Beverly

There are no events scheduled. You can still show your support by sending flowers directly to the family, or planting a memorial tree in memory of Beverly Jean Stancil.
Plant a Tree

We encourage you to share your most beloved memories of Beverly here, so that the family and other loved ones can always see it. You can upload cherished photographs, or share your favorite stories, and can even comment on those shared by others.

Posted Feb 08, 2021 at 10:55am
Jim - Losing a loved one is never easy no matter when that time comes, however we can take comfort in knowing that God truly knows what's best. Knowing that plus being able to recall good memories of your mom will make the loss easier to bear as time goes by. You and Susan and the rest of your family are definitely in my thoughts and prayers,

Posted Feb 05, 2021 at 07:31pm
She was a beautiful person. She was wonderful about telling stories from her past. She always had a story or two to share. She gave so much of herself working for the RedCross. She said that she loved meeting new people. She was a master Gardener and could stay there all day. She was always ready for an adventure and when you were with her it was a great one. I loved her like an older sister and will miss her. The world was a better place when she was in it.
Jim and family so sorry for your loss . Love,Linda Robinette
Comment Share
Share via:
JC 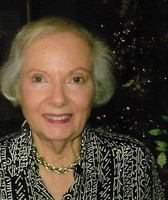