To share your memory on the wall of Jackie Harbour, sign in using one of the following options:

He is preceded in death by both his parents, loving grandparents, brother, Mike, and a son, Joseph Shaine Harbour Walker.

Jack spent 34 years in the oil industry; making friends all over the world. After retirement, he and Debbie became truck drivers and spent 13 years seeing the country and delivering the goods. His passion were his family and his music.

What do we do when the last song is done? The record has played through and the arm clicks back into place. In that golden silence we reflect on how the song made us feel. That is the gift that music gives us. Not the notes throughout but the silence at the end when our soul files it away to be cherished and remembered. From the beginning to the end, our brain and heart conspire together turning the song this way and that trying on the story of the melody. Wrapping the notes and the words around every fiber of our soul and in that silence, we are made just a bit more whole as the song becomes a part of us forever. Whether we realize or not, we bring every song with us… some we love… some we don’t… but they all come with us. Daddy always said bring the music past where you found it. I used to think that just meant teach people how to make music, to share the music you love with others, and that music is life. I had it backwards. Life is music and people are the songs. Every person we interact with becomes a part of us just like the songs do. It’s true that Daddy taught us how to play and yes, he bought many people their first instrument. He also gave money to people in need. He opened his homes to those without one. He helped people fix their vehicles… their homes. He got people jobs. He inspired people to better themselves. He brought people past where he found them… Just like the music. Those of us left behind have the gift of this golden silence. Take this time to remember the greatest of songs and how it made us all feel.

Receive notifications about information and event scheduling for Jackie

Print
A memorial service will be held in Louisiana at a later time.

We encourage you to share your most beloved memories of Jackie here, so that the family and other loved ones can always see it. You can upload cherished photographs, or share your favorite stories, and can even comment on those shared by others.

Posted Apr 13, 2021 at 11:37am
Always remembered Jackie Ray, playing, & singing, and having a large time, at family,functions. He was the best. He is truly missed. MICHELLE,& Ron Martin.
Comment Share
Share via:

Posted Apr 13, 2021 at 09:39am
Deepest sympathies To Debbie, Family and Friends. A wonderful Life lived, many hearts touched, whose Soul will live on in those he loved.
Comment Share
Share via: 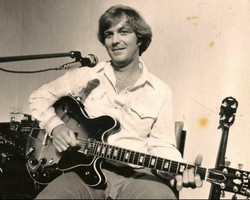