To share your memory on the wall of Larry Henson , sign in using one of the following options:

We request from each of you to think of our dad each time you go out on Greers Ferry Lake and don’t catch anything, because he caught the only good fish out there…13lbs 8oz Large Mouth Bass, just in case you forgot. When you take that first scorching hot bite of fried fish and burn your entire mouth, because you were too dumb to let it cool. When you see one of those old John Wayne movies playing, wishing with todays’ technology, they would add color. When you hear a Hank Williams’ song, Sr, or Jr, either are the only acceptable country musicians other than Patsy Cline and Loretta Lynn. When you laugh for absolutely no reason, know Larry just made some kind of a wisecrack, and think of him!
Read Less

Receive notifications about information and event scheduling for Larry

There are no events scheduled. You can still show your support by sending flowers directly to the family, or planting a memorial tree in memory of Larry Eugene Henson .
Plant a Tree

We encourage you to share your most beloved memories of Larry here, so that the family and other loved ones can always see it. You can upload cherished photographs, or share your favorite stories, and can even comment on those shared by others.

Posted Apr 13, 2020 at 08:31pm
I was really sorry to hear about the loss of your dad. He was a good man and was fun to be around. I hope you all find peace in knowing he's in a good place and with his other daughter Carla. He's in good hands.
Comment Share
Share via:
PA

Posted Apr 12, 2020 at 08:14pm
So very sorry, Larry was a good man and loved by many family and friends. Praying for God to give you all comfort and peace.

Posted Apr 10, 2020 at 09:16pm
Delina , Monica and Dakota, I am so sorry to hear about Larry passing away. My thoughts and prayers are with you as you go through this difficult time. Larry will definitely be missed. He is now resting in heaven with Carla Kay and I know that was a joyful reunion.

Posted Apr 10, 2020 at 06:32pm
Delina we are so sorry for your loss.May you find peace in God holding your family in his hands
Comment Share
Share via:
L 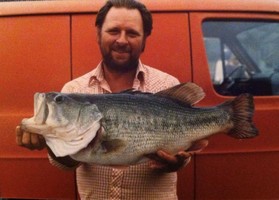