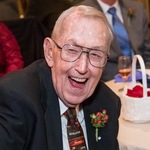 On Tuesday August 18, 2020, this world lost a great man; Stanley Richard Mascoe, 89, of Sherwood, Arkansas, departed from this world and entered his heavenly home. He was born October 23, 1930 in Indianapolis, Indiana to the late Stanley Orville Mascoe and Martha Elizabeth Fish Mascoe. Stanley served as a Second Lieutenant in the United States Army specializing in chemical care, he was very patriotic and proud of his country. After discharging from the Army, he became a sales representative for a paint company. He and his wife Pam attended Woodland Heights Baptist Church in Conway where he has served as a deacon for many years, a Sunday school teacher, and a Gideon for over 50 years; he loved handing out bibles to the children and witnessing to those he would come in contact with. He enjoyed many things such as fishing, Christmas, telling others his love for the Lord and spending time with his family. Stanley was a very loving husband, father, grandfather, great grandfather, and a respected man; he will be greatly missed by all who loved him.

Stanley is preceded in death by his parents, Stanley, and Martha Mascoe; his first wife, Joyce Louise Mascoe; one brother, Gerald T. Mascoe.

Pall Bears will be Stanley’s grandsons.

Honorary Pall Bears will be the Sunday School Class.

In lieu of flowers, the family has asked that donations be made to the Gideons or Woodland Heights Baptist in Conway in honor of Stanley Mascoe.

Visitation will be held at 1:00 p.m. with services following at 2:00 p.m. at the Woodland Heights Baptist Church in Conway with Brother Larry White officiating. Burial will follow at the Crest lawn Memorial Park in Conway.