To share your memory on the wall of George Lawrence, sign in using one of the following options:

Print
George Lee Lawrence, the son of George Killough Lawrence and Ester Lelola Eubanks Lawrence, was born in Hickory Ridge, Arkansas on December 8, 1934, and passed away in Fairfield Bay, Arkansas on April 20, 2021 at the age of 86 years.

Geo... Read More
George Lee Lawrence, the son of George Killough Lawrence and Ester Lelola Eubanks Lawrence, was born in Hickory Ridge, Arkansas on December 8, 1934, and passed away in Fairfield Bay, Arkansas on April 20, 2021 at the age of 86 years.

George worked in the hardware industry for most of his professional life and owned his own hardware store in Little Rock, Arkansas before retiring. In his leisure time, he enjoyed spending time with his family and his hobbies included bowling, water skiing, woodworking, and mowing his yard. He was a member of Greers Ferry First Assembly of God Church.

To send flowers to the family or plant a tree in memory of George Lee Lawrence, please visit our Heartfelt Sympathies Store.

Receive notifications about information and event scheduling for George

We encourage you to share your most beloved memories of George here, so that the family and other loved ones can always see it. You can upload cherished photographs, or share your favorite stories, and can even comment on those shared by others.

Posted Apr 22, 2021 at 02:20pm
Our thoughts and prayers are with your family during this time. With Deepest Sympathy

Posted Apr 22, 2021 at 12:57pm
Daddy Lee will always be in my heart and will leave a huge void in my life-I know he is happy in heaven with Momma Lynn and Jesus. He doesn't have to use the walker he said he never needed, and doesn't have to drink the water I was always trying to get him to drink-hopefully there are lots of things he can move around to keep him busy, and that he is happy to be home.
Comment Share
Share via:
HS

Flowers were purchased for the family of George Lawrence. Send Flowers 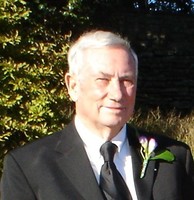